In summer 2018 I did workshops with year 6 pupils from Sir Francis Drake Primary School and Grinling Gibbons Primary School. Both workshops were held at and organised with the help of the wonderful team at Deptford Lounge. Pupils had already discussed the idea of regeneration with their teachers in school and were therefore prepared for this workshop that would go into more detail.

The first workshop involved 12 pupils from Sir Francis Drake Primary School, and the first question I asked them was what they could tell me about the regeneration of Deptford. Their responses were that Deptford is changing with more and more blocks of flats being built and with more and more people coming to Deptford. I then asked pupils to draw the building they are living in, place the drawings on a giant map of Deptford and talk about what they liked and disliked about living there. It emerged that most pupils from that group live in flats and that they appreciate having space, a park or green space nearby and living close to friends. What reduces their sense of well-being were not having space for themselves, all kinds of noise they can’t escape, particularly at night, rubbish lying around and strangers hanging around near their homes. There was one child in particular, whose housing situation was so bad with terrible overcrowding, leaks, noise, ill health and crime, that they could not think of anything positive to say. Another child, who was in temporary accommodation outside of Deptford, commented that the long commute to school with 2-3 buses made them feel exhausted and that they would love to be able to live nearer the school.

The second task was to build a Lego model that reflects the changing face of Deptford. I deliberately gave them a vague brief to see what they would come up with. Some may have built predictable models (e.g. police station) or models of things they’d like to have for personal reasons (e.g. skatepark), but the after-discussions showed some interesting insights into how the pupils perceive what is happening. Here are some of the things they came up with.

Play areas and green spaces: they commented that there aren’t enough green spaces in Deptford where children can get away from the noise of the streets. They also thought that Deptford needs more trees to absorb the pollution, which they say is a problem. One child also commented that more “animal play areas” are needed. “There are more people now and they might want more pets, but lots of parks have ‘no dogs allowed’ unless they’re guide dogs so there are not enough places where dogs can run around and get fresh air.”

A bank, an IKEA and a hospital: this is to address the amount of new people coming into the area who need to put their money somewhere, need to buy furniture to furnish their new homes, and will also need a hospital some time. I found these comments interesting as children were basically saying that there aren’t enough facilities in the area to cater for all the people moving in. Flats are being built, people are lured into the area but there isn’t enough infrastructure and amenities to cope with the increase in population.

Finally, one child wanted a corner shop on Grove Street as there was nowhere in that area to get any sweets. I then asked them what they’d learnt from this workshop, and here are some of their comments: 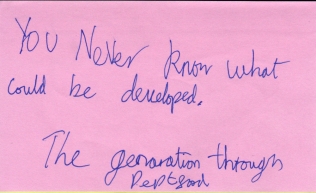 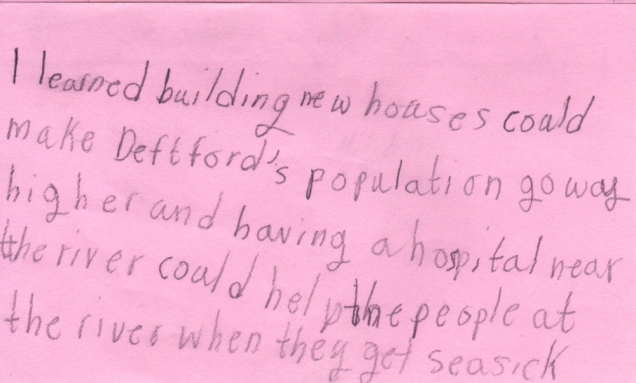 The second workshop involved 9 pupils from Grinling Gibbons Primary School, and I also asked them first what they could tell me about Deptford’s regeneration. They responded with similar things such as Deptford’s growing population, more traffic and pollution, the modernisation of old buildings and the construction of a lot of new buildings, the loss of green spaces, posher and bigger shops. However, an interesting discussion ensued.  Whereas one girl felt that Deptford was becoming safer with fewer crimes committed, another child, who’d recently had to witness a stabbing outside his house, said that too many young people have knives and commit crimes, and that he feels scared when coming home from school. It saddened me to hear a young child talking about this; it was clear that he won’t be forgetting this experience.

I asked the children to mark on the map where they live and it turned out that most live near their school. I asked them whether they thought a lot has changed in the area. One child commented: “Convoy’s Wharf is going to bring a lot of change. They are building new flats everywhere and they are increasing the population, but they end up killing the trees because I heard from my friend that they were gonna build flats near this park [Sayes Court Gardens].” 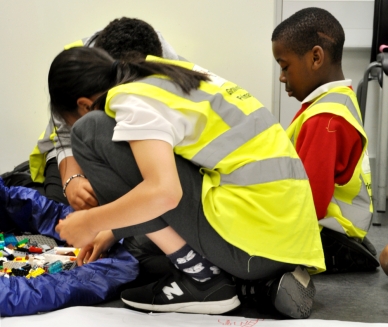 I then asked them to build models that reflect the changing face of Deptford and place them on the map. Interestingly, most models were placed by the river and close to the Pepys Estate. Here are some of the models they built and their explanations:

“I built a park inside Fordham Park to say ‘don’t build on it anymore’.”

“I put the police and a group of people on the Pepys Estate to try and reduce the amount of stabbings and killings.”

“I put a car and a truck on Evelyn Street, close to the Pepys Estate. This was to show that there is too much traffic and too much noise from all the cars and trucks in that area.”

Because of their negative responses, I asked them to build another model of something that would make Deptford a better place. Once again, the models expressed continued concern about crime, safety and pollution, with more models representing police and green spaces. The most sophisticated model, in terms of physical and metaphorical parts, was the joint model made by two girls who explained it like this: “We think there should be more police around to put everything harmful down, so here is the police and in this part, the people put their weapons down and become friends right there. And here, there is a person who is friendly to a person who doesn’t look like them. And over here, this is to show there should be more green spaces.” They called their model ‘the harmony model’ (images below).

I was very moved by that model and explanation by two young local girls who demonstrated acute awareness of the issues facing society. Their model was very much about the need for peace and harmony, and looking after the environment. 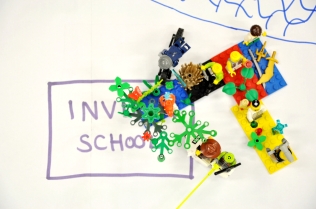