Benson Odidi is the proprietor of Divine Cargo on 355 New Cross Road. Divine Cargo is a shipping company that provides a full range of air, sea and road freight services. If you need a parcel over 23 kg shipping anywhere in the world, Divine Cargo is the place to go, and if you need to have a parcel shipped here, Divine Cargo can also be a collection point. On the premises, there are also computers, copy machines and facilities for scanning, project binding and using the Internet. And finally, there is also an array of colour samples of African textiles which can be ordered in bulk and shipped anywhere in the world. 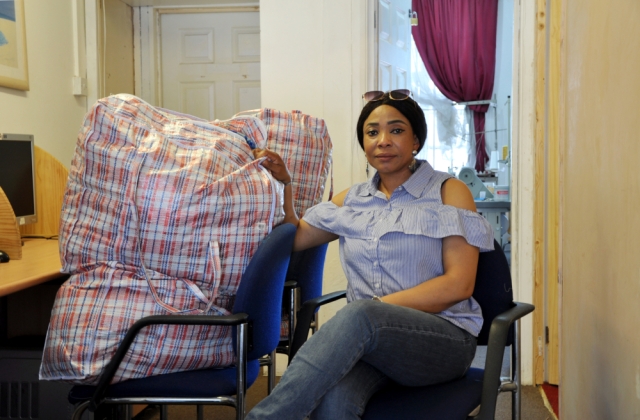 I am speaking to Bola, Benson’s wife, who in his absence tells me about their business, the area and the fact that their shop is under threat of demolition. The first thing Bola tells me is the kind of relationships that have formed over the years through the shop, and that this is not just a shop but plays a role in the community as well. She tells me about an elderly gentleman who came in asking for help after suffering an attack on a night bus. “This elderly gentleman, who used to live upstairs, came in asking for help with filling in an insurance form to give to the police because he had been attacked by a group of youths on the night bus. He’d been in before a few times using the computer or asking for help with other paperwork and as I’ve always assisted him, he felt he could come in here asking for help. A few weeks later he died because the punch to his head did some damage. And because I helped him fill in the form, I was able to tell his family what happened. Without this they would not know the reason for this death.”

I then ask Bola about the shop – how it all started, what they do and how the planned demolition will affect them. “We started in 2010. The parade wasn’t really lively then, many shops were closed and properties empty. Immediately after we came others followed and the parade is really lovely now. Some put up Christmas decorations, people sit outside, sometimes there’s music playing and the children are dancing. There is a really nice atmosphere here and children and adults like it.”

Bola tells me that many of their customers are (Goldsmiths) students who, after finishing their studies, need their belongings shipped back home or a place elsewhere, or who come in to have their projects printed and bound for college. But their customer base is very mixed. Some elderly people who live upstairs come in to use the computers, often asking for help with technology and paperwork. Other people, also often living upstairs, have their parcels delivered here (and Divine Cargo also collect smaller parcels to be picked up by neighbours who are not at home), and many people come in ordering textiles in large bulk to be shipped somewhere – often to Africa for a traditional wedding or elsewhere for curtains.

When I ask Bola about the demolition plans it becomes clear again, as with the other businesses, that it would mean the end of their business venture. “All the rates will go up – for phone lines, broadband, water and rent. We won’t be able to exist with those rates. We would become jobless. It would also deprive our customers of our services.”

Bola understands that redevelopment has to happen, but that this should happen in areas where there is space or where buildings are in a really bad state. According to her, this does not apply here: “The buildings here are fine, they are not in need of demolition. They need maintenance and they should have been maintained better to stop demolition but since we’ve been here no repair work has ever been done. And there is no space here already. The traffic is always congested and with more people there will be even more traffic. People here don’t want demolition; it’s not the right decision and it will affect a lot of people. The parade is already lively as it is – we are like a family here and demolition will separate many people who have built up lasting friendships. For example, there is an elderly man living upstairs who comes down to the parade every morning. As we are the first shop to open, we often sit down and have a chat. Or sometimes people just come in asking for help with letters to the council.”

When I ask Bola what she would like to say to the council she replies with: “Listen to the people, take their experience into consideration. Revisit the decision to demolish – it’s ok the way the area is, it just needs decorating.”

What strikes me most though is what Bola says afterwards. “Children love the parade, they come here every day after school and hang out here – it’s such a nice atmosphere. And they know us and they come in to use the toilet. There is no public toilet in New Cross, the next one is in Deptford Lounge. And it’s not just children that use our toilet, other people too. Some people are diabetic or have other health conditions where they might suddenly need to go urgently, and we let them. I know we as a business don’t have to but we need to look after the less privileged people – there are no more places for them to go and not having a toilet to go to might mean not going out for them. Today it’s all about money, it’s all for the posh and those with money. I know we need business but it doesn’t mean we can’t look after the less privileged.”

In the end, Bola tells me that she has experience working with people with Autism and knows about issues of access for less privileged people and how they are treated at times. And when I listen to her passionate account about the lack of public toilets, the wider implications of this influx of private money and the persistent cutbacks of public facilities become even more apparent, restricting access and participation even further for the less privileged.