A while ago, I did a whole-day drop-in workshop at Pepys Resource Centre to see how people using this library feel about the regeneration of Deptford. It was an interactive workshop where people could choose how they wanted to express their opinions: by drawing, building a model, chatting and/or writing some comments in response to four questions. The latter two were the preferred choices.

I set up in the main library space where everybody could see me and I invited people to join me as they came in. It was a Wednesday, which meant Luciana and Joyce were there with many others. Luciana was assisting whoever came in, Joyce was teaching people to cook in the morning, the befriending club for the elderly was present and stayed for a community lunch, and downstairs there was a training course for local women. In the morning, before people arrived, Joyce showed me how to cook a simple, cheap but healthy and tasty meal in just 20 minutes. I also joined the community lunch where we all sat together and ate all the different things that were made that morning including ‘my’ dish. In the afternoon I chatted to the women on the course. Throughout the whole day, I engaged in interesting discussions with various people who came in about the changes happening in Deptford and collected views and comments. I leave it up to the reader to interpret the comments. 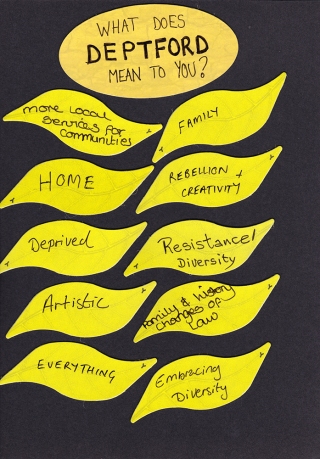 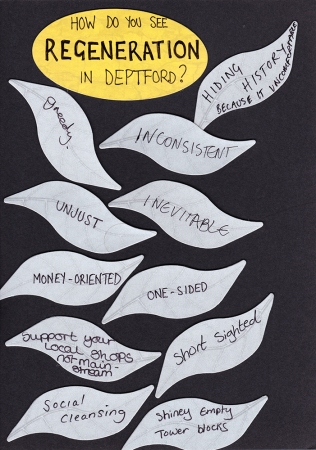 A week before the ballot starts for residents to vote for or against the demolition of the Achilles Street area, me and Jacquie went to see Nancy who lives in one of the maisonettes in the buildings known as 363. These maisonettes are above the shops on New Cross Road, overlooking the estate on Achilles Street at the back. They are part of the redevelopment plans and face demolition. As soon as we walk in, Nancy tells us how distraught she is about the council’s plans to demolish her sanctuary, the only place where she has felt safe during a life that hasn’t always been easy. Almost in tears she shows us her beautiful home, which is filled with family photographs, perfectly arranged ornaments, tastefully chosen wallpaper, lace curtains and tablecloths, and chandeliers. The love for detail is immediately visible. I feel like I have stepped into a cabinet of curiosities, a cabinet of wonder. She points to the Italian-style floor tiles in the lounge, which look new but have been in the flat for 25 years. She also tells us about the wooden floors upstairs which she put down. Nancy and her family took out everything the council had put in and decorated it themselves. The only thing that’s now from the council is the new walk-in shower that Nancy needed after two hip operations. You would never guess this is a council flat simply because of the personal investment that’s been made. “It’s my home!”, Nancy says, visible upset at the prospect of losing it. 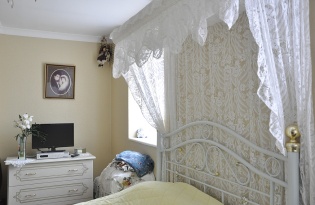 Nancy and her whole family (she is the eldest of 10 children) came to the UK from Cyprus in 1968. She was in her early twenties then. They first stayed in Battersea before moving to the borough of Lewisham, where Nancy slept on a mattress on the floor because there wasn’t enough space for such a large family. Nancy was desperate to get her own flat and was told to move into a hostel to speed up the process. When she hadn’t heard back after 3 months in the hostel, she moved back to her mum’s to sleep on the floor again. Then, after another month, she was finally given her own council flat on the Pepys Estate. This was in the late 1970s. Nancy lived in that flat for 7 years, but it wasn’t a good experience as she felt very unsafe on the estate. She remembers frequent fights, drug problems and other troubles. Her worst experiences were getting burgled and having firecrackers put through her letterbox. “I lived in a flat at the end of a horrible corridor that resembled a hospital corridor. I never felt safe there. One day I got burgled. They came through my window after climbing onto the scaffolding. I was at work – I used to work as a seamstress and sew buttonholes in a Deptford factory. All my lovely jewellery got stolen, even my shopping in the fridge was taken. I had no insurance at the time. I lost everything. Another time, somebody put a firecracker through my letterbox. It was around Christmas and teenagers were playing with firecrackers. I wasn’t in at the time. When I came back, the carpet was burnt. Luckily, the fire went out by itself. I was lucky the flat didn’t burn down. This was just after I had got pregnant, so I told the council I can’t live there anymore.”

During that time, Nancy passed the 363 building and noticed that the flat she now occupies was empty. She asked somebody how many bedrooms there were in the flats – she was told 2. She asked the council about the place and was told that it was unfit to live in and that she would have to wait until the flat had been refurbished. Eventually she got the phone call to view the flat. Although the council had only done basic decorating, she immediately liked it and said: “I’ll move in!” Nancy was 8 months pregnant when she moved in. 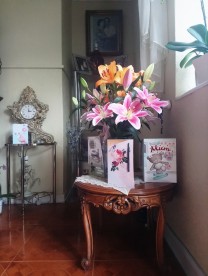 Her son was born in Guys Hospital in January 1987 and now Nancy has one grandchild. She also used to mind Chris sometimes (interviewed previously) when he was growing up on the estate. Her life in the 363 building has been a happy one. “I’m happy here. I have my GP down the road, Lewisham and Greenwich are nearby, Guys hospital is not far. The flat and the building are really good quality, there is no damp or any other issue here.” Nancy shows me her spacious balcony where she keeps her garden. There’s even space for a little wooden shed. She talks me through all her plants: the plumb tree, which carried lots of fruit last year and whose leaves have turned red during the early autumn start, olive trees, a money tree, a chilli plant with really hot green chillies, a lemon tree, a citronella plant and others. There is dill and mint, and there is a very special rose bush: one year for Mother’s Day, Nancy’s son bought her a rose, which has since grown into a whole bush with lots of flowers. As she tells me about each plant, she gently touches the leaves of each of them and clears away any dead leaves, making it very visible just what the garden means to her. There are also ornaments everywhere, and necklaces with blue evil eyes to prevent bad things from happening. After I tell her that I love dill, she cuts off the whole bush to give to me. She also asks me if I like mint and cuts off a bunch of leaves for me. She says having this outdoor space allows her to stay at home where she feels safe while having the opportunity of being outdoors at the same time. She can’t go out as much these days although she still likes going to Lewisham to do some shopping. She’s had hip operations and looks after a very ill husband. Her garden and the open space outside her front door give her much needed breathing space and allow her to keep in touch with her neighbours.

“I’m so happy here”, she exclaims with her eyes filling up again. “I feel safe! I have never been burgled; nobody ever knocked down my door, never been in any difficulty here. I feel safe here because I know all my neighbours. I’m afraid to move into a new place because I won’t know who lives in the building, I won’t know who the people are and what they’re like. I just don’t understand why the council want to demolish perfectly good flats which have no damp, no issues with the electrics, no problems whatsoever! If I wanted to move, I would have moved a long time ago! Nobody from the 363 flats wants to move. The new buildings are built with low quality – cheap wood, cheap materials – with kitchens in the lounge and no outdoor space.”

Nancy takes me upstairs to show me the rest of the flat. Every corner is decorated with love and attention to detail. The neat array of family photographs, ornaments and lace cloths continues in every room. Every time I take a picture, she double-checks nothing is lying around and that there are no creases anywhere. In the end, she says: “Money is not important. Most important is being happy and the place where you live is so important for happiness. What are you doing in life if you aren’t happy? My home, this home, is where my happiness is. Here is where I feel safe, where I feel happy. I want to stay here and die here.” 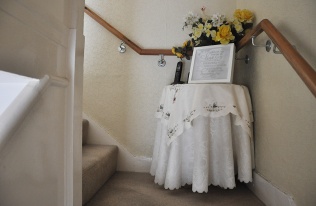 In the end, Nancy shows me a photograph of herself in Cyprus in 1967. She was going to a friend’s wedding. It was the year before her family moved to the UK. 51 years on, she is still that same good-looking woman as in the photograph. Forcing her to move out of her home at this age will destroy her.